“If there ever comes a day when we can’t be together keep me in your heart, I’ll stay there forever” ~ A. A. Milne

The doctors performed rounds early every morning. They would go around to each patient’s room in the Pediatric Intensive Care Unit and stand in the door way with all of their clip boards and traveling computers. They would discuss Lincoln’s progress, how things went the previous day, medications, test results, possible diagnoses, and the action plan for the day. Jeremy and I always tried to be there during the rounds so we could listen in and make sense of all the medical lingo they were saying in reference to our son. They decided to try and slowly turn down Lincoln’s respirator because he appeared to be breathing well, and he was initiating most of his own breathing without the help of the machine. I remember thinking how crazy that was that they could tell all that from looking at a monitor.

The results for Lincoln’s MRI had been analyzed and Dr. Brault wanted to know if we were interested in seeing the images. They brought in a computer on wheels that had a large screen and immediately started walking us through several pictures of his brain. It was so surreal. The pictures were hard to look at, but Jeremy and I both wanted to see them. Lincoln’s brain glowed brightly on the screen, but we quickly saw what had been alluded to the previous evening… he had dark shadowy splotches all over his brain. We were told that all of the dark spots were where brain death had occurred, and that they were keeping a close eye on Lincoln for brain swelling because sometimes dead brain tissue can also damage the surrounding good tissue. The doctor than pulled up the image of Lincoln’s brain stem and the entire center was black. I was crushed when I saw that picture. The darkness in the brain stem was what led them to believe that he would never be a functioning baby again. In a way, viewing the pictures kind of made everything sink in and become tangible. Dr. Brault also said the results showed that Lincoln did not have a corpus callosum, the part of the brain that connects the left and right hemispheres of the brain. The side effects can range from undetectable to very serious. They thought that the missing corpus callosum more than likely attributed to his eating difficulties.

Dr. Brault said that because of clear metabolic issues, symptoms and the missing corpus callosum, they now believed that the top contender for Lincoln’s diagnosis was Leigh’s Disease.  Leigh’s Disease is an extremely rare neurological metabolic disorder. We were told that there is no cure,and very few treatments, but they were going to begin them right away. They were going to be giving him a “cocktail” of vitamins and a special diet, along with the sodium bicarbonate (for his acidosis) and seizure medication.

If you would like to read more about Leigh’s Disease, please visit these sites that helped me to understand a little about what was going on in my little boy’s body. It is a very complicated and rare disease, with several variations, and multiple inheritance patterns.

We were left alone for awhile to let all this new information sink in. There are too many thoughts, emotions, and feelings to even try to convey here. A nurse walked in and began hook up Lincoln’s treatment to his IV. She asked if we were doing anything for Valentine’s Day. I merely said “no” amazed that she asked us that, first because I forgot it was Valentine’s Day, second because how in the world could we possibly be thinking of going off and celebrating right now?? Looking back now, I know that Jeremy and I “celebrated” our love in our own way that day by supporting each other and being there together going through a tragic situation side by side. We never lashed out or blamed each other for anything. We were standing together with our son firmly on true love for one another. When you go through something like this it changes your relationship forever. You either grow closer together, or let it tear you apart. There cannot be an between. We have learned to really cherish each other.

I remembered that somehow in the rush of swinging by our house to get some clothes and stuff on the way to Riley that I had somehow managed to grab the bag that had the Valentine’s hat and socks in it that I had bought Lincoln just a few days ago. I had Jeremy run and get the bag from the car after asking the nurse if it was ok. When he returned we put on his little “Heart Breaker”  hat and socks that said “I ❤ YOU”. I stood by him looking over him as he laid there in his festive little ensemble. I remember think that the “heart breaker” on his hat had kind a double meaning because our hearts were breaking, just not for the reason the hat was implying. 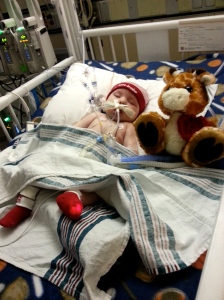 Bubby in his Valentine’s outfit

I always dressed Lincoln in the month’s holiday apparel when I took his 1 – 4 month pictures. I was so terrified that there wouldn’t be a 5 month picture to add to our collection. The nurses just raved and raved over his little “outfit”. I had to agree that he was the most adorable boy ever. Jeremy and I decided to go get something to eat and talk some things over, and while we were gone the nurses made adorable Valentine’s for us from Lincoln with his foot prints on them. They are some of our most treasures possessions. 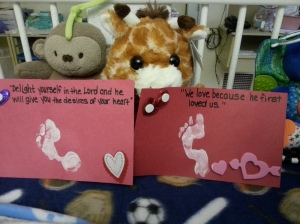 Valentine’s from Lincoln to Mommy and Daddy.

I wanted to get something for Lincoln because I knew this could be our only Valentine’s Day together so I ran down to the gift store before they closed with my sister and my cousin Amber. Now mind you, there are three gift stores in Riley, so you can imagine us running around like crazy people trying to find these shops. We ended up going to two of the three because the first one just didn’t have a card that I liked well enough, so off we go, running to the next store in a mad dash! I ended up getting a little tiger, a balloon, and a card for Lincoln. Other people bought him cards and animals as well. The end of his bed filled up pretty quickly.

Lots of Valentine’s for our baby!

Jeremy broke down as we signed Lincoln’s card as he realized he had never signed “Daddy” before. It was a long, long day, but we tried our best to make it special for him. I whispered in Bubby’s ear that he was my little Valentine and gave him a kiss on his little cheek, still puffy from trauma. He is the best son I could of ever dream for… You will always be my special Valentine Lincoln, mommy loves you! ❤