2 Samuel 22:19
They confronted me in the day of my disaster, but the LORD was my support.

That first day at Riley was such a blur. All kinds of specialists coming to look at Lincoln and talk to us. At one point they came in and covered his head in little electrodes to check his brain activity. They talked about scheduling him for an MRI that night. They said that Marion General Hospital had sent a lot of great records along with the flight team. They had done a CAT scan before the helicopter arrived and the doctors told us that they wanted to talk to us about what was happening. At this time our families had arrived and were waiting in the PICU waiting room, though we hadn’t actually seen them yet.

The doctors led us down the hall from the PICU where there were a lot of closed doors. They opened one and led us into a room with office furniture style couches and chairs. There were no windows in the room and I started to feel incredibly nervous. We all sat down and one of the lead PICU doctors, Dr. Hoskins, began to speak to us. I remember one of the very first things she said… “we don’t know that your son is going to survive this.” I immediately went into shock. If you have ever been in a car wreck, the way I felt was like the feeling you have right before the impact… except there isn’t one so the feeling just stays and stays. Dr. Hoskins went on to say that if Lincoln did survive they didn’t know if he would ever breathe on his own, eat on his own, be potty trained, or the even know that Jeremy and I were his parents. That moment in that small cage of a room was absolutely horrific.

Another doctor, Dr Brault, started telling us that she had looked at the CAT scan from MGH and it appeared that Lincoln had several stokes that night, before the seizure had begun, and they had left a lot of damage. There were black spots all over his brain, including the brain stem, which controls so many of our basic functions, which is what lead them to believe what they did about his prognosis. Many of the doctors were crying as they relayed this information, including my husband, but I couldn’t shed a tear. I could not believe they were talking about my sweet boy… just a few hours ago we were cuddling together in our bed at home, safe and sound.

Dr. Hoskins asked what we wanted as far as care, and Jeremy said that there was no question, “that is my son, do what you have to.” Jeremy asked if we could be alone and they left us to absorb the information we had received. We hugged and cried so hard… Jeremy asked if I would pray and I begged God to please prove the doctors wrong.

The social worker who had been in the room with us had waited outside the door incase we needed anything, and Jeremy asked if she would get our family… I remember telling our family about finding out we were pregnant. They were so excited! My mom screamed and my dad cried. My sister immediately wanted to start knitting something for the baby. Jeremy had been an uncle for years and now the role was reversing and his brother would be the uncle. We couldn’t wait to be parents and start our own family.

How different this news would be to deliver… our parents, siblings, and Jeremy’s grandpa filed into the room, and we all broke down as Jeremy relayed the news from the doctors. Our little Bubby, who had brought such amazing joy into our lives, might be taken away.

After all that information I just wanted to go back to the PICU and see Lincoln. They were getting ready to take all the electrodes off of his head so he could go down for the MRI. They had seen some good activity that confirmed he wasn’t brain-dead, which was a huge relief, but they wanted to further confirm the results of the CAT scan. We walked by Lincoln’s bed as it was wheeled to Radiology. No one else was in the waiting room as we waited for the scan to be completed. After it was over we went back to his room and the nurse told us that they had gotten us a room down stairs, and Lincoln was stable right now so we should get some sleep since we had been up since 2:30am. We reluctantly agreed. I really wanted to stay with Lincoln, but everyone agreed that tomorrow would be better if we were rested. So we kissed our little Bubby goodnight and went down to our room. 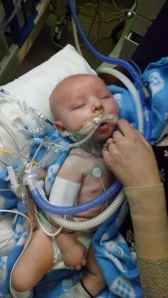 Head still red from the electrodes

As we collapsed onto the bed I began to sob… how could this be happening? Little babies aren’t supposed to have strokes! There really isn’t any other way to say it, we just begged and begged God over and over to heal our son, until finally, we gave into sleep.