Our little boy has always been a fighter… we knew it from the moment he came into this world with a 19 hour labor! His first week was spent on a biliblanket and daily visits to the hospital to check his bili rubin levels. Finally, we got the results we were waiting for, no more blood draws, his levels were normal! everything was hunky dory for us after that, or so we thought…

Around a few months old Lincoln was barely gaining any weight. He had begun struggling to eat from a bottle, choking, spitting up, trouble breathing after eating. We brought up our concern at his doctor visit, and after explaining we noticed about his behavior he was diagnosed with acid reflux and put on some medicine, along with the other usual things, add rice cereal to milk, small frequent feedings, etc.

After a month of that I really began to suspect that something else was going on with our little boy. At 3 months old, he had grown inches, but was still at his birth weight. People were beginning to question why he was so skinny, which of course didn’t make me feel great, but I knew we needed to find out what was going on with our baby. The acid reflux tricks weren’t really helping and Lincoln was still struggling to eat.

Our Doctor decided that we needed to try an NG tube to force Lincoln to take in the calories he needed. He told us that if this didn’t work we were going to have to start testing for possible metabolic issues, to see if there were other causes to the lack of weight gain, but Lincoln started gaining weight like it was going out of style. Around a pound a week! We were so relieved that it wasn’t a metabolic issue, but he still struggled with drinking from a bottle and it got worse as the weeks went on so we were referred to a gastroenterologist at Riley Hospital for Children at IU North. 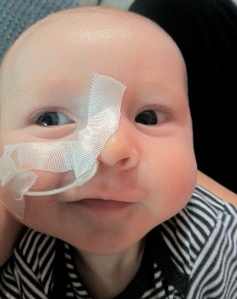 We saw a lovely doctor there who suggested being admitted right away, having a swallow study, and meeting with a speech therapist. During our stay we learned how to place the NG tube ourselves, which was scary at first, but we became pros in no time. During the swallow study we found out that Lincoln was aspirating when he ate orally, but they weren’t sure the cause. They diagnosed him with “Failure to Thrive – Feeding Difficulties” and sent us back to the gastroenterologist, who we saw a few weeks later. She ordered a head ultrasound when we went back to home as she felt we needed to begin to rule everything possible thing out as she wasn’t satisfied with the diagnosis. 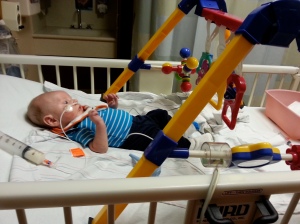 Spending the night at Riley at IU North

Lincoln had his head ultrasound and was such a good boy! The radiologists couldn’t believe how he laid so still and was all smiley and sweet. They remembered me from my ultrasound when I was pregnant and were so excited to actually get to see the baby outside of my belly. They had trouble getting some of the images they needed, and were going to put a recommendation through to our gastroenterologist to order a CAT scan, but we never got the chance to schedule one… 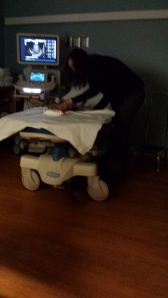 2 thoughts on “A little back story…”